Mirai no Kimi to, Subete no Uta ni 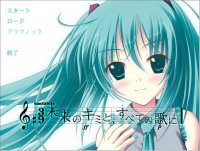 One day in December, the protagonist finds a girl sleeping in the street. But he soon finds she’s actually a musical android named Miku.